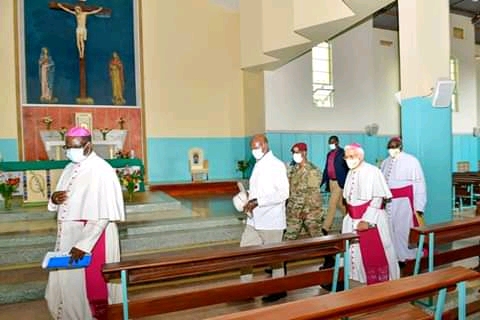 President Yoweri Kaguta Museveni has pledged additional 400 million shillings for the refrabrishment of Lira Cathedral after acknowledging the successful completion of the first phase of the project.

The President in 2018 made a contribution of 400 million shillings for the first phase of the renovation of the 50 year old Cathedral that saw its expansion to a 1600 seating capacity with both interior and exterior modifications.

While announcing his second pledge on Wednesday 21st October shortly after inspecting the church building, President Museveni thanked the Bishop of Lira Diocese and the entire Christian community for the initiative they under took to “build the House of God” saying it is the reason that made him to contribute the 400 million shillings towards the renovation which, according to Bishop Santo Lino Wanok cost 1.1 Billion Uganda Shillings. Other contributions came from the United States Episcopal Conference and the Comboni Missionaries who gave 50,000 US Dollars and 50,000 Euros respectively on top of funds realized locally and nationally.

The second phase of the project include the rehabilitation of the Bishop’s residence and the church’s parking yard to befit the standard of the upcoming plan for Lira City.

The President later talked about poverty alleviation and the role the church can play in improving household income through agricultural activities. He particularly commended the Gulu Archbishop John Baptist Odama for embracing commercial cassava production that has taken off in Acholi and hopefully in Lango.