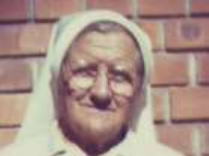 As the Catholic Church on Saturday 12th September celebrated Our Lady of Sorrows, it was the day Lira Diocese shared out to people the news about the death of Sr. Anna Pia Demarchi, remembered for her efforts in the growth and development of Alito Leprosy Centre in Alito Parish. Sr. Anna Pia, a Comboni Missionary Sister died at almost 94 years old in Bergamo (Italy).

For 20 years she devoted herself to the people affected by leprosy, especially the children, supporting and continuing the work started by another Comboni sister, Sr. Gabriella. Through her efforts and the involvement of many friends and collaborators with Sr. Annapia, Alito grew and developed into a well organized and model centre, a place of love and hope, where lepers were not only taken care of and educated but also learned skills to enable them to support themselves. Born in Northern Italy on 31-12-1926 and soon after her profession as a Comboni Missionary Sister, she left for Uganda, where she arrived on the 1st of January 1949, just one day after her 22nd birthday. She was first sent to Nyapea as a teacher. She remained there for 21 years, up to 1960, when she was transferred to Lacor (Gulu) working as a nurse for 5 years. In 1965 Sr. Annapia was then sent to Lango, to Alito Leprosy Centre.

A message from Lira Diocese said; “Sr. Anna Pia has been a real and loving mother to thousands of Ugandans. As we pray God to reward her for her untiring and generous love for the poor and needy, especially the children, we also thank the Lord for the gift to Uganda and particularly to Lango of such a good missionary, with a heart full of love for Africa, like the one of her Founder, St. Daniel Comboni. May she rest in peace!”